When Does COBRA Apply?

Most private-sector employers that maintain group health plans for their employees must comply with COBRA’s continuation coverage requirements. This includes, for example, corporations, partnerships and tax-exempt organizations.  However, COBRA does not apply to group health plans maintained by small employers. A “small employer” means an employer that had fewer than 20 employees on typical business days during the preceding calendar year. 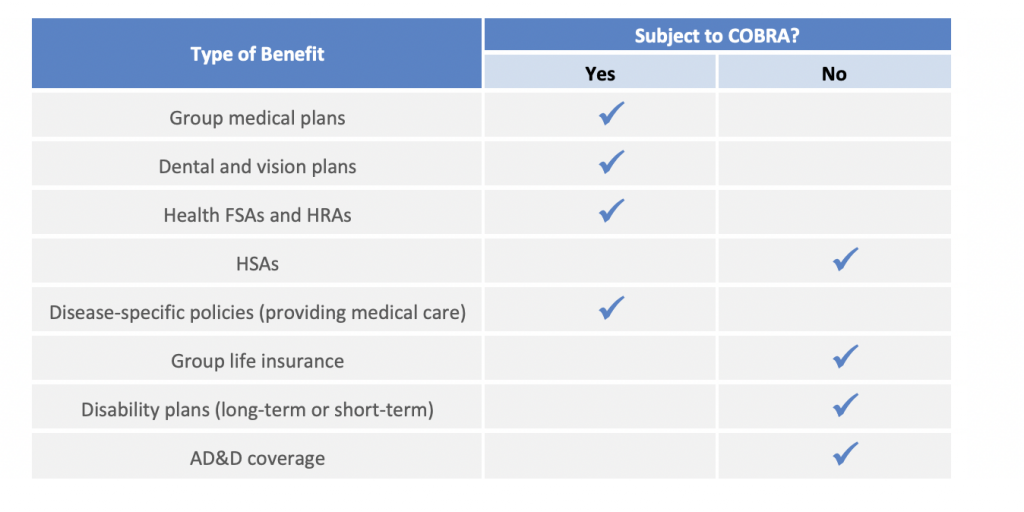 Who is Entitled to COBRA Coverage?

A group health plan is required to offer COBRA continuation coverage only to qualified beneficiaries and only after a qualifying event has occurred.

The following chart outlines the seven qualifying events under COBRA and the corresponding maximum coverage periods:

How Long Does COBRA Coverage Last? 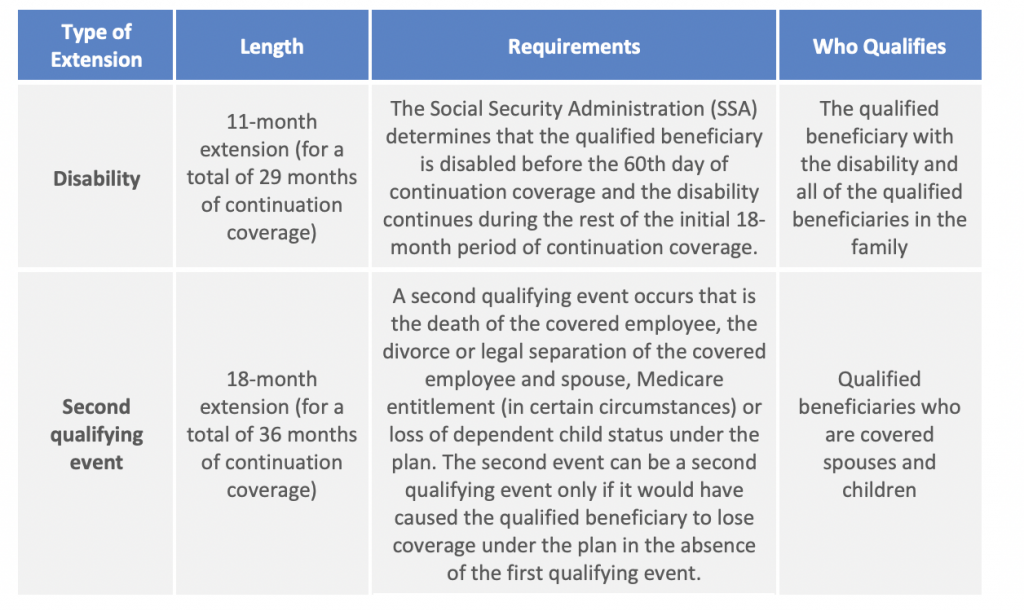 What Benefits Must Be Offered?

Who Pays for COBRA Coverage?

COBRA premiums may be increased if the costs to the plan increase, but they generally must be fixed in advance of each 12-month premium cycle. The plan must allow qualified beneficiaries to pay premiums on a monthly basis if they ask to do so, and the plan may allow them to make payments at other intervals (weekly or quarterly).

What Notices Must Be Provided?

The following COBRA notices are required to be provided in certain situations:

Notice of Unavailability of COBRA Coverage

Continuation coverage must generally be made available for a maximum period (for example, 18 or 36 months). The group health plan may terminate continuation coverage early, however, for any of a number of specific reasons. When a group health plan decides to terminate continuation coverage early for any of these reasons, the plan must give the qualified beneficiary a notice of early termination. The notice must be given as soon as practicable after the decision is made, and it must describe the date that coverage will terminate, the reason for termination, and any rights the qualified beneficiary may have under the plan or applicable law to elect alternative group or individual coverage.

What are the Rules for Electing COBRA?

General Rules: At a minimum, each qualified beneficiary must be given at least 60 days to choose whether to elect COBRA coverage. This 60-day period is measured from the later of: (1) the date the election notice is provided; or (2) the date on which the qualified beneficiary would otherwise lose coverage under the group health plan due to the qualifying event. However, as stated on page 5, COVID-19 deadline relief extends the timeframes for health plan participants to elect COBRA coverage.

Are you ready to save time, aggravation, and money? The team at Maxwell Agency is here and ready to make the process as painless as possible. We look forward to meeting you!